Many people know that Abilene was founded by the Texas & Pacific Railway in 1881, but not as many remember another railroad that served this area for much of the twentieth century – the Abilene & Southern.

The A&S was the brainchild of Col. Morgan Jones, a Welsh immigrant who came to the US in 1866, and assisted with the completion of the first transcontinental railroad in 1869. He later helped built the Texas & Pacific, as well as numerous other rail lines throughout West Texas. In January, 1909, he began work on the Abilene & Southern.

Jones’ original vision was to build a railroad from Abilene through Winters and Ballinger, and then on to points south and west, but for various reasons, those plans were never completed. Ultimately, the line stretched almost a hundred miles, from Ballinger in the south, through Abilene, and northward to Anson and Hamlin.

The Abilene & Southern was very much a West Texas road. Its primary traffic over the years was grain, cattle, bales of cotton, and cottonseed oil. Passenger traffic was usually handled by a passenger coach attached to the rear of a freight train. (In the world of railroading, combined freight and passenger service is known as a “mixed” train.)

Those who rode the mixed train report that it was common for the passenger coach to be set out on a side track at a station while the train crew went about their switching duties, picking up and dropping off cars. They would then re-couple to the coach and be on their way. It must have really played havoc with the conductor trying to keep the train on schedule! Mixed train service ended in the late 1950s.

During Col. Jones’ lifetime, the A&S was operated as an independent railroad, interchanging with the Texas & Pacific in Abilene, and the Santa Fe at Tuscola and Ballinger. In 1927, however, after the old man’s death a year earlier, the profitable little railroad was bought by the Texas & Pacific, which continued to operate it for decades to come. 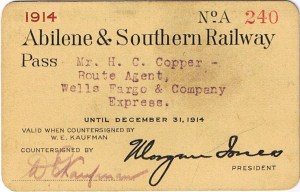 Alas, economics and the dwindling populations of the towns it served finally caught up with the A&S. The tracks north of Abilene were abandoned in 1937. In 1972, the line from Winters to Ballinger was pulled up. Ownership of the line passed from the T&P, to the Missouri Pacific, to the Union Pacific, which finally abandoned the remaining portion of the line south of Abilene in 1989.

Today, only about seven miles remain, interchanging with the Union Pacific and serving industries in east Abilene. Southern Switching Company handles these chores, and their green switching engines can be seen trundling back and forth along the former A&S tracks. 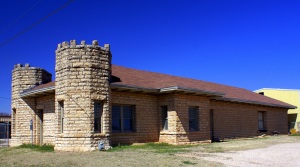 There are still a few reminders of the A&S today. The station in Ballinger, with its unique stone twin turrets, is still standing. Drive along the highway between Ballinger and Abilene, and if you look carefully, you can still spot the old right of way. The old A&S Freight Depot has been moved and incorporated into a brew pub on South First. And, when he died in 1926, Welshman Morgan Jones was laid to rest in his adopted hometown of Abilene, Texas. 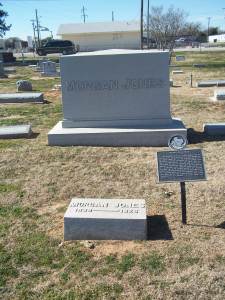 And that is not all. Although the colonel never married and left no direct descendants, his nephews and other members of his extended family remained in Abilene, and continued to use the profits from the A&S – as well as their own fortunes – to benefit the entire community. There’s a huge wing of Hendrick hospital named for a nephew, Percy Jones, and his wife, Ruth Leggett Jones. The planetarium at Abilene High is named after another nephew, Morgan C. Jones. And every non-profit in town is familiar with the philanthropic investments of the Dodge Jones Foundation.

So the next time you’re sitting in the comfortable Percy Jones waiting room at Hendrick, think about the old Abilene railroad. The next time you’re driving along US Highway 83 through Winters and on to Ballinger, notice the old roadbed that was there before the highway, and remember the men who built that line, and those who operated her.

The next time you’re on Treadaway Boulevard, and you see those little green switchers shoving hopper cars loaded with grain, remember the Abilene & Southern.

They are all around us, and we see them every day, even if we don’t always recognize them for who they are.

Surely you have seen these people. You might even be one yourself. If so, thank you.

They are the firefighters who run INTO burning buildings, when everyone else is running out. They are the police officers who run TOWARDS the sound of gunfire. They are the nurses who help patients with unpleasant symptoms, especially when those patients can’t help themselves.

They are the teachers who buy school supplies out of their own pockets and offer encouraging words to struggling students. They are the pastors who quietly sit with families that have gotten bad news. They are the linemen who climb utility poles in the cold and wet, so the rest of us can stay warm and dry.

They often go unsung, unnoticed and unappreciated. They watch as our society cheers athletes, rock stars, actors – people most of us will never interact with or personally know. But our everyday heroes hear no cheering crowds, and nobody is paying them much attention. And yet, every day, day after day, they quietly go about their business of helping other people, being a friend, making a difference.

They are Mr. Holland. They are George Bailey.

Surely you have known such people. A Sunday School teacher. A little league coach. A Scout leader. They are the folks who get involved in other people’s lives in a positive way and make a difference. They’re not flashy, and they’re not celebrated. But they’re remembered as the people who care.

And here’s the good news: we can all be in that category, if we’re willing to take a moment, to offer a kind word or a shoulder, or a sympathetic ear. I was a pastor for a long time, and I’m convinced that when tragedy strikes, people don’t remember very many of the things that people said. But they remember who was there.

You can be a hero today. Somewhere around you right now, a kid needs a mentor. A neighbor needs a friend. A co-worker needs someone to talk to. Meals on Wheels needs drivers. You can do that. We all can. Jesus said that if all we do is offer a cup of cold water in his name, we would certainly be rewarded in his kingdom.

It’s not too late to put this on your list of things to do for 2016: Be a more caring person. Give a damn. Get involved. Make a difference.

We need all the heroes we can get.