First, the obvious – I like trains. I like riding on them, watching them, and reading about them. When I can’t do any of those things, I enjoy the hobby of model railroading. One of the great things about Christmas is that it’s the one time of the year when “playing with trains” is considered cool, rather than quirky. So the following piece is one of my favorites.

“The Train” is a dramatic reading by the late actor Geoffrey Lewis, performed with the musical and storytelling group, “Celestial Navigations.”  I first heard it a few years ago on a local radio station, who had it in their Christmas music mix.  I don’t think it’s too well known, so I wanted to share it with you and hope you will enjoy it.

You can buy a copy of it here, or see the YouTube video here.

“The Train”
by Geoffrey Lewis 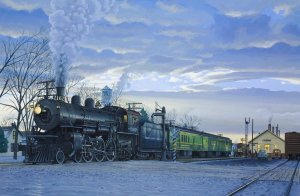 There was hardly anyone on the train, as it moved through the countryside. The snow-covered land slipped smoothly by. Way out there I could see a lonely house now and again, just turning on their lights against the cold, oncoming night. Two thick-coated horses in the almost-dark, steam coming out of their nostrils, eating hay, then they were gone. The sky was quickly dark; the stars were crisp through the chill air.

Wasn’t very warm on the train. A man was asleep at the other end of the car, his coat rolled up for a pillow and a Christmas present had fallen on the floor. A few seats away a young woman sat with her baby. She was staring out the window. She saw me looking at her, reflected in the window, and she half-smiled at my reflection and she stared beyond that out into the cold dark landscape that was slipping away. I turned and gazed back out my window, and then I heard a very soft, “Ohhh.” I turned and looked at the woman and I saw her hug her baby to her, very closely and very intently.

Suddenly I felt very close, very close and warm, and a door appeared in the back of my mind. I opened it and light flooded in and I heard my father say, “Burrrr, burrrr, it’s cold outside. You can put those logs right on the fire,” and as I stepped in, he shut the door behind me. I was standing in my living room; the Christmas tree was all lit up over by the front windows.

I heard laughter upstairs, my mother came through the swinging kitchen door carrying a plate of red and green frosted cookies, and behind her came the smell of roasting turkey like a gauze that draped around my head, like the smell of earth that hangs out in the ocean and lets you know home is just over the horizon. Someone was stamping snow off their boots on the back porch and my little sister and two of her cousins were lying on their stomachs in front of the tree, starring at the presents like sharks at a man’s legs under water, hoping to see beyond the tinsel and pretty paper.

I put the logs down and took off my gloves to warm my frozen fingers. In the dining room my grandma was scolding my grandpa about the best way for him to crack the walnuts that he was already cracking. He looked at me through the doorway and shrugged his shoulders and continued shelling the walnuts. I took off my thick coat and threw it on the floor by the door and went to stand by my aunt who had just called me to come sing the tenor part at the piano. There was talk and loud laughter coming out of the kitchen where the windows were steamed. We were singing, sometimes forgetting the second verses, but sounding pretty good.

But suddenly, somewhere in all the warm and familiar sounds, I heard someone very quietly crying. I looked around trying to locate the person and then my eyes landed on the young woman in the train, a few seats away holding her baby. Her eyes with tears, hardly seeing the back of the seat in front of her. I got up and walked awkwardly up the aisle of the swaying car. I put my thick coat around her shoulders, then I sat down beside her. I held her hand in both of mine and we rode like that, not looking at each other…looking straight ahead and I head her whisper under her breath, “Merry Christmas.”

The train slipped away across the sleeping land, into the dark winter night.

The music of Christmas has always been one of my favorite parts of celebrating this season of joy. When I was a child, I remember my mom had Christmas music playing during the entire month of December. Christmas music continues to be special to me, both the serious and the silly, the sacred and the secular. I want to tell you the story behind my favorite of all Christmas songs.

The year was 1847. Placide Cappeau de Roquemaure was the commissioner of wines in a small French village who had some local fame as a poet. Although he was not a regular church-goer, the local priest asked him if he would compose a special poem for use at that year’s Christmas service, and Cappeau agreed.

With the Christmas story from Luke in mind, Cappeau began to imagine actually being in Bethlehem and watching the events of that night unfold, and he soon completed the poem, which he entitled, “Cantique de Noel.” But Cappeau felt that the poem needed to become a song, and so he turned to a musician friend, Adolphe Adams, for help.

Adams was a Jew, but he agreed to help his Gentile friend compose a song for a holiday that Adams did not celebrate, to honor a Messiah that he did not worship. The tune was finished, and three weeks later, “Cantique” was performed for the first time at the midnight Christmas Mass. The song found wide acceptance in churches across France.

But a few years later, Cappeau walked away from the church and became part of the socialist movement, and French church officials discovered that the tune had been written by an unbelieving Jew. They denounced the song as being unfit for worship services, lacking in musical taste, and “total absence of the spirit of religion.” (Personally, I think that’s a good thing, but I digress.)

Anyway, that might have been the end of “Cantique,” except the song found its way to America a few years later, and was given new life by a staunch abolitionist, John Sullivan Dwight. You probably never heard of him – frankly, neither had I – but he prepared and published a new translation of Cappeau’s poem into English. Dwight was especially moved by the third verse of “Cantique.”

Truly He taught us to love one another,

His law is love, and His gospel is peace.

Chains shall He break, for the slave is our brother,

And in His Name, all oppression shall cease.

Sweet hymns of joy, in grateful chorus raise we,

Let all within us, praise His holy Name:

Christ is the Lord! O praise His Name forever!

His power and glory, Ever more proclaim!

Christ is the Lord! O praise His Name forever!

His power and glory, Ever more proclaim!

And so, “O Holy Night” became popular on this side of the Atlantic, at first in northern homes during the Civil War, and later, throughout the country.

There is a legend that says during the Franco-Prussian War in 1871, a French soldier on Christmas Eve stood up, exposing himself to enemy fire, and began to sing “Cantique de Noel.” The Germans held their fire, and when was finished, a German soldier began to sing “From Heaven Above to Earth I Come,” a Christmas hymn by Martin Luther. The story goes that troops on both sides observed an unofficial Christmas truce.

“O Holy Night” became involved in another Christmas miracle of sorts a few years later, in 1906. Reginald Fessenden was a 33-year-old university professor and former assistant to Thomas Edison. On Christmas Eve of that year, using a new type of generator, Fessenden began to speak into a microphone: “And it came to pass in those days, that there went out a decree from Caesar Augustus, that all the world should be taxed…”

Across the country, and far out at sea, wireless operators who were used to hearing only coded dots and dashes over their equipment heard a man’s voice, reading them the Christmas story! It was the first known radio broadcast. When he finished reading the story, Professor Fessenden did something even more remarkable. He picked up his violin, and began to play a Christmas hymn – “O Holy Night.” And so it became the first song ever heard on the radio.

(The above material taken from “Stories Behind the Best-Loved Songs of Christmas” by Ace Collins, Copyright (c) 2001, Andrew Collins. Published by Zondervan.)

I love this carol, and it always moves me to tears, in part because of its soaring melody, and also in part because it answers the “So What?” question of Christmas. Jesus came to Earth – so what? He taught us about the love of God – so what? This song reminds us that we must live out the meaning of Christmas in the way that we treat others, to love God by loving our neighbors, and to join the work of Christ in breaking the chains of sin and injustice.

One of my favorite versions of this hymn is by Point of Grace. I hope you enjoy it.

From our family to yours, Merry Christmas. 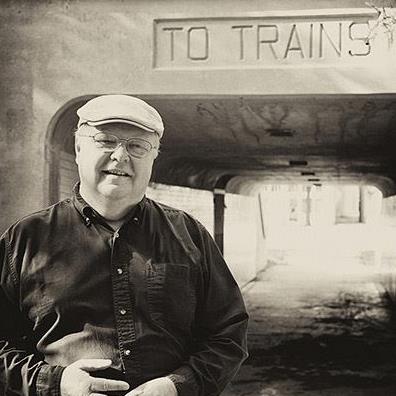