In a previous post, I described my trip on Amtrak from Ft. Worth to St. Louis – I guess you could call it a birthday present to myself. I had two reasons for choosing St. Louis as the destination. For one, it was the farthest point I could get to and still have enough free miles to get back home again (that’s important!). But beyond that, St. Louis is home to one of the finest collections of railroad equipment anywhere in the country, at the St. Louis Museum of Transportation.

From the downtown Amtrak station, I caught another Amtrak train, the Missouri River Runner, to the suburb of Kirkwood. From there, it was just a short Uber ride to the museum. It was lightly raining off and on throughout the morning, but not enough to dampen my plans.

A guided tour had just started when I arrived, but I was able to catch up with the volunteer and the handful of guests he was leading, and we began walking the grounds of the museum. We took advantage of a break in the rain to tour some of the exhibits that were out in the open, including a collection of unusual freight cars, a caboose or two, and a Texas & Pacific baggage car that has been converted into a classroom on wheels for school groups.

We also saw a beautiful, side by side display of three locomotives, headlined by a rare, stainless steel Burlington engine, the “Silver Charger,” #9908. This unusual diesel-electric was built by EMD in 1939 to pull the “General Pershing Zephyr” between St. Louis and Kansas City, and was the last of the “shovel nose” units in service. A Frisco RR 2-10-0 steam locomotive and an early diesel switcher from the Sabine River & Northern sat beside the shiny passenger engine. 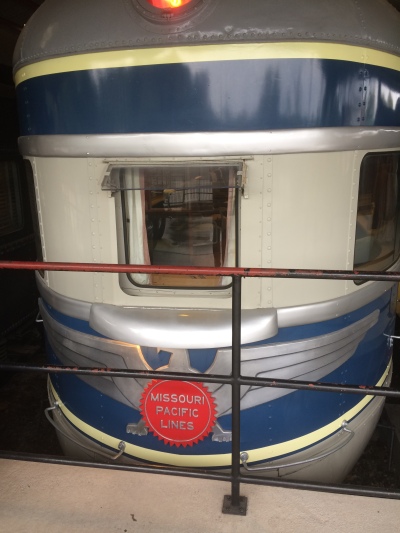 Under their sprawling pavilion, the museum has a nice assortment of passenger equipment, locomotives and more, including a number of rare and one-of-a-kind items. One of the things I especially enjoy about passenger trains from the 1950s and 60s were all the bright colors, and the museum does not disappoint, with the blue and cream of the Missouri Pacific’s “Eagle,” the two-tone light and dark greens of the Northern Pacific, the shiny silver of the Burlington, the maroon and red of the Gulf, Mobile & Ohio, and more, all proudly on display. 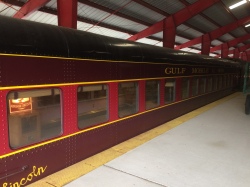 Scattered throughout the museum grounds are numerous other items of significance to any railfan, including a brown & yellow GM Demonstrator locomotive from 1939, part of the famous “Train of Tomorrow” that toured the country in the 1940s. 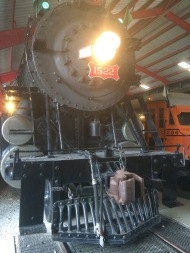 The famous Frisco locomotive #1522 is there, along with a UP 4-8-8-4 “Big Boy,” an enormous “Centennial” diesel, and much, MUCH, more, including an extremely rare “Aerotrain,” 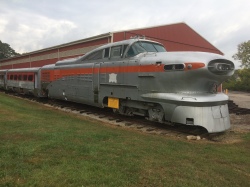 a futuristic train that looks like some- thing out of a science fiction movie, but actually saw service in the 50s and 60s on the Rock Island and other railroads.

Time was beginning to get away from me, and I had more that I wanted to do before my train back to Texas left, so I caught a return ride on Amtrak to downtown. I went up to the top of the St. Louis Arch, saw venerable Busch Stadium (home of the Cardinals), and toured the famous (and historic) St. Louis Union Station (no longer used by Amtrak), built in 1904 for that year’s World’s Fair, as celebrated in the Judy Garland musical, “Meet Me in St. Louis.” I also had a fine seafood dinner before making my way back to the Amtrak station.

The southbound Texas Eagle was on time, and I boarded and found my way to my room. I deposited my gear and headed for the dining car, just in time for dessert and coffee. From there, I went back to my room and slipped between the sheets and was soon asleep, rocked by the gentle rhythm of the rails.

Epilogue: When I woke up the next morning, I wasn’t exactly sure where we were until I looked out the window. Even in the foggy, gray, half-light of that early fall dawn, I knew we were in Marshall, Texas, because right outside my window I saw the steam locomotive Texas & Pacific #400, which is parked beside the historic Marshall depot. I showered and dressed and headed for breakfast. Even though this train ride wasn’t yet over, I was already thinking about where I could go on my next #AmtrakAdventure.