This is just a brief note to let you know that I’m taking a break from posting for a while. Have a blessed and safe summer.

I’d give almost anything to be able to wish my mom a “Happy Mothers Day” this weekend, but I can’t. She passed away several years ago – September 25, 2010, to be precise. This is a blog post I wrote on the anniversary of her passing in 2013, and I wanted to share it again.

And I don’t mean to preach, but if you still can do so, give your mom a hug and tell her you love her. 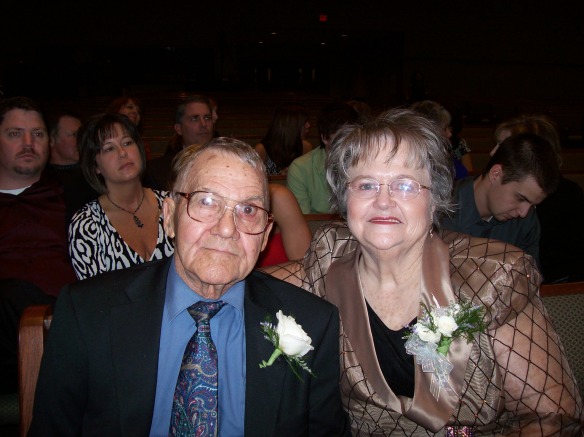 Three years ago today, I lost my mom.  But in all the ways that count, she has never left me, or our family.

Friday, September 24, 2010, started like any other day.  Mom and Dad had gone to Beaumont from their home in Orangefield for an eye appointment, then they stopped at one of their favorite restaurants for lunch: IHOP.  As they were heading home, Mom said that she needed to use the bathroom, but she dropped her keys as she was trying to unlock the front door.  She had already had the stroke that would claim her life.

Dad called the ambulance, and the EMTs promptly arrived.  (The house is out in the country, so thank goodness for enhanced 911 service!)  She ended up at Baptist Memorial in Beaumont.

One by one, my brothers and I, along with other family, arrived as soon as we could get there – in my case, about 3:30 Saturday morning.  The nurses were great, and the doctor was as gentle as he could be later as he explained that this was a “terminal brain event.”

One of my brothers had been on a mission trip to Guatemala, helping drill a water well for a village that needed a new source of good water.  Flights in and out of Central America have a somewhat loose connection to scheduled times, but he was able to get out on time – less than an hour before a Gulf hurricane came ashore, and shut everything down for three days.  He and his wife set a new record getting from the Houston airport to Beaumont.

An hour later, Mom was gone.  Personally, I think she was just waiting on her boys to all get there before she left.  One by one, we got to say our goodbyes, kiss her, hold her hand, and let her go.  It was Saturday, September 25, 2010.

There were so many wonderful friends who supported us, at the hospital, with their cards and visits, and so much sharing of food, of laughs, of tears, of memories.  My brothers and I got to preach her funeral, and that was a special time.  The funeral procession was over a mile long going out to the cemetery.  And even the funeral director felt the need to comment publicly at the graveside about what a remarkable woman she was. 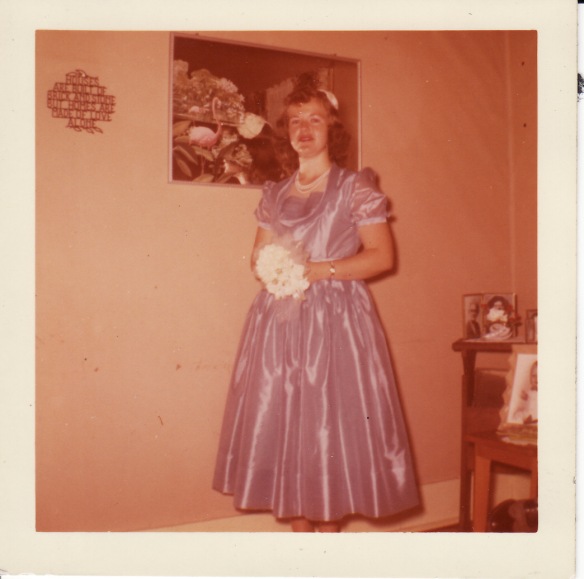 Here’s mom on her wedding day, and 50 years later, at the church, during their golden anniversary reception, visiting with her dear friend Mary Russell. 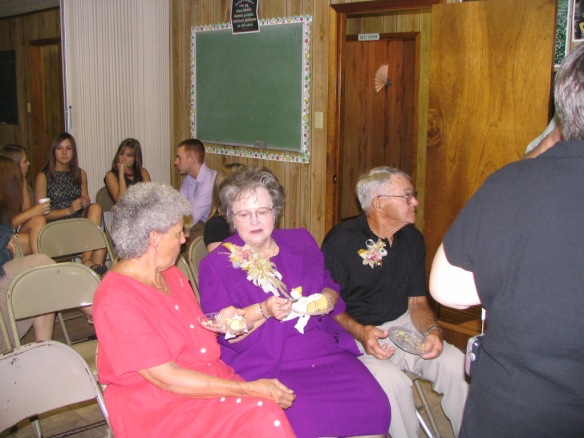 Dad has been so strong and brave.  He has learned to live by himself – well, along with his faithful canine companion, Chica, in spite of falling almost two years ago and breaking his leg, which has left him in a wheelchair. (Editor’s note: This has changed as of February, 2017.) I know that he misses her terribly, but he is determined to carry on and make her proud. 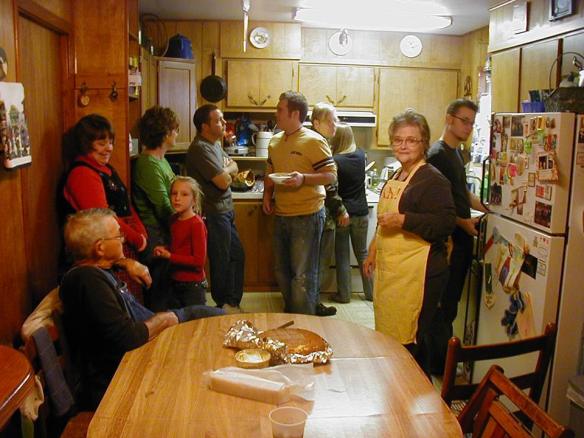 This is one of my favorite snapshots of mom – it’s from Christmas about 2006, with a whole big, rowdy bunch of us crammed into their small kitchen, and her directing traffic and enjoying the chaos and noise of our family.  And that’s not even all of us.

Here’s Mom, from about 1959, I’d guess.  That’s her with my brother Buzzy, and yours truly, displaying the blazer, bow tie and cowboy boots that the well-dressed young man was evidently wearing that year.

I still hear her voice in my head, and desperately wish we could have had more time together, but I’m thankful for many things.  And so much of what she taught me, that I still hold on to today.

• I learned to love God’s Word from the countless Bible stories that she read to us every night.
• I learned to be passionate about worship from hearing her strong, clear alto voice as she boldly sang out.

• I learned to serve others by watching the way that she volunteered at church and in the community.  (That’s her, in her hospital volunteer uniform.)
• I learned to respect people who were different by the way she would never let us use hurtful words, even in jokes.
• I learned to cherish the moments we have with family and friends, to laugh a lot, to forgive from the heart, and to say “I love you,” and always give “just one more hug.”

Because you never know when you won’t be able to any more.