I’m just back from a week in Guatemala. Why I went there is a story 40 years in the making. 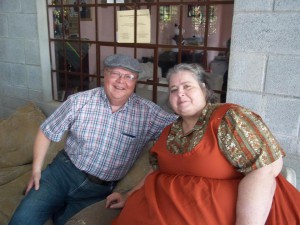 When I 12 or 13, I met a young woman named Lori Pinney. We were about the same age, but because of how our birthdays fell, she was a year ahead of me in school. She and her family lived in a neighboring town, where her dad was the preacher of the Christian Church there. We would see each other at various area church functions, summer youth camps, and other activities.

We both ended up going to Dallas Christian College, where we had many classes together. She was something of a trailblazer, because she was a Bible and ministry major, at a time when girls just didn’t do that sort of thing – but she did, and she did it well.

Lori ended up on the faculty at Colegio Biblico, a ministry training school in Eagle Pass, Texas, and she eventually met and married a young preacher from Guatemala, Eugenio (Queno) Nij. In 1985, they moved back to Guatemala, where they have lived and raised a family and worked ever since.

(There’s a whole story about Queno being falsely accused and framed for murder and being wrongly imprisoned until an international outcry finally compelled authorities to release him, but that’s another story for another day.)

Even back in our days at DCC, Lori’s passion was Christian education – but she never expected how God would use that calling. After being involved with different kinds of service, in 2001 she led in the establishment of the Morning Glory Christian Academy. What began as two rooms and 90 students is now six buildings, 35 faculty and nearly 700 students!

I have been asked to serve on the board of directors that oversees Morning Glory, and so I felt it was important for me to go to Guatemala and see the work for myself. Thanks to some very generous friends here, I was able to go, and I’m really glad I did, because I have learned some important lessons in the process.

Make the most of what you have. Guatemala is a poor country, but some of the friendliest, most hospitable people I’ve ever met. I saw lots of small gardens, as families take advantage of even tiny pieces of ground to grow food. Space on a flat rooftop becomes a great place for a clothesline to dry clothes. Just about every home has a tank for collecting rainwater. Their approach to life is a great reminder that we can either whine about what we don’t have, or be thankful for what we DO have, and get busy making the most of it.

Don’t make excuses. Bless her heart, Lori has a number of serious health issues – most significantly, a life-threatening thyroid condition that causes weight problems and many other health-related complications. A lot of people would let stand in their way and become an excuse. But not that Texas girl! It makes me aware of how easily we can make excuses and let little things stop us.

I hope you’re not tired of hearing about Guatemala, because I’m certainly not done talking about it. I’ll be telling you more about the school, the kids, and how you can get involved, if you’re interested. But for now, I will just invite you to join me in praying for Morning Glory, for their students and faculty, for my friend Lori, her family, and her health.

Morning Glory is a great work, and I’m honored to be associated with it.