I am just back from taking a couple of weeks off. During that time, I was able to visit some family, help my dad with some chores, get some reading done, ride a train, and eat some Cajun food. I was gone for a few days, and came home broke and tired.

That’s how you know it was a good trip, right?

No, I’m just kidding about that part – but it WAS a good trip. The main reason I went was to go down to the Beaumont / Orange area to see my 85-year-old dad and spend some time with him. And we did have a really nice visit, and I was able to help him with some things around the house. But I also enjoyed spending some time with my brother David. He’s a pastor in Spring, Texas, and was also on vacation. 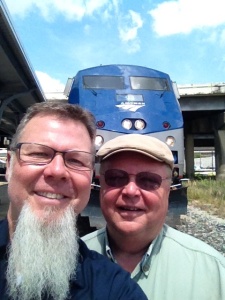 He and I had often talked about trains and taking a trip together on Amtrak, so we did just that – not so much to go anywhere, but more just for the experience of riding a passenger train together. We boarded the eastbound “Sunset Limited” in Houston, and toot toot, we were gone, headed for Lake Charles, Louisiana.

Now as my friends can tell you, I love trains, but as great as that part of it was, an even better part was getting to spend time with my youngest brother. We grew up in a family of four boys – he and I are the bookends, with me as the oldest and him as the youngest. Our mom’s parents lived in the small Hardin County town of Grayburg, between Beaumont and Houston.

The old Missouri Pacific RR main line runs right through there, and when we were kids visiting our grandparents, we used to spend hours down by the tracks at a small railroad side track where they used to load freshly-cut pine logs onto flatcars, destined to be turned into paper at one of the mills in East Texas.

(Yes, I know we shouldn’t have been playing there, and that it probably wasn’t safe. Get over it. We never wore bicycle helmets, either.)

How we loved to see freight trains coming through! The big blue and white MP engines, the long trains, and the red caboose at the end. The box cars with names of faraway places – Bangor and Aroostook, Atlantic Coast Line, and the New York Central, Great Northern, Santa Fe, Denver & Rio Grande, and the Illinois Central, just to name a few. And when they came roaring through, it was all noise and power, sound and fury, speed and excitement. We knew to get well off the tracks and wave from a safe distance. And as Johnny Cash once observed, it was always very important that the conductor in the caboose waved back.

Somewhere I still have some flattened pennies that we made.

And the smells on those hot afternoons – the oily odor of the creosote from the ties, and the zingy smell of hot steel in the Texas sun. We would walk along the rails and practice our balancing skills and watch the distant signal lights, hoping they would turn red, heralding the approach of another train.

Anyway, our grandparents have long since passed away, but the little town is still there, and so are the freight trains, now operated by Union Pacific. And when you take Amtrak heading east towards Beaumont, you go roaring right through there.

So we climbed aboard in downtown Houston, checked in with the conductor, and headed for the dining car and lunch. We both had a pretty good Angus beef hamburger, and enjoyed a nice visit with an older lady and her niece who were returning to Florida after a trip to California. After lunch, we walked to the observation car as the train rolled through the countryside and past the little towns.

The old siding at Grayburg is still there, and it doesn’t take long to go past it. I looked over, and my brother was wiping away a tear. I asked him what he was thinking. He said he thought he saw four little boys run over to the tracks after the train went by, looking for flattened pennies.